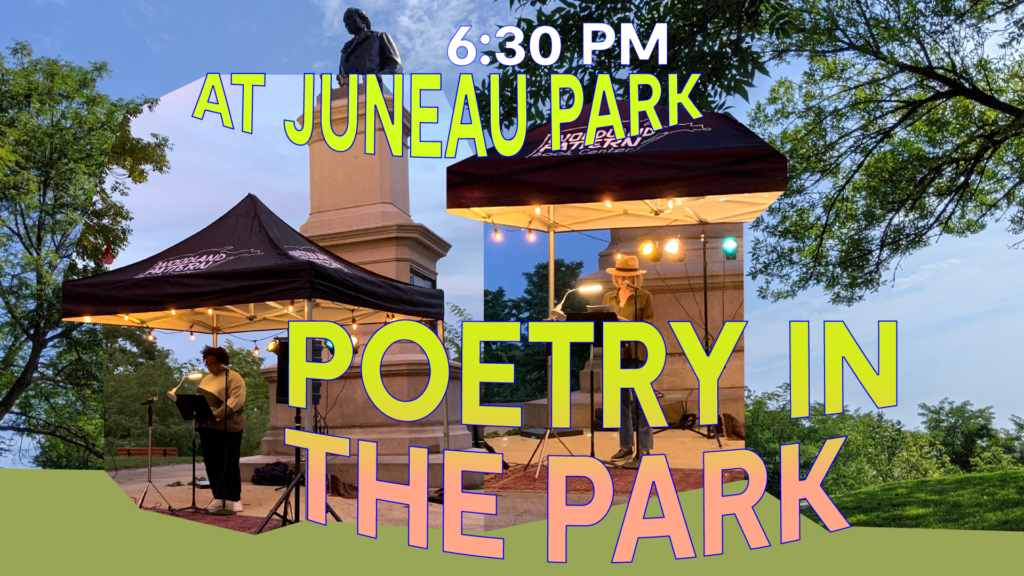 Bring your blankets and chairs, snacks and drinks, and friends, and join us at the Solomon Juneau statue for this beloved summer reading series, now entering its eighth year. Poetry in the Park takes place in Juneau Park on the second Tuesday of June, July, August, and September, with rain dates scheduled on the second Wednesday of each month. This season’s events are made possible with support from Juneau Park Friends, the National Endowment for the Arts, and Village Church. 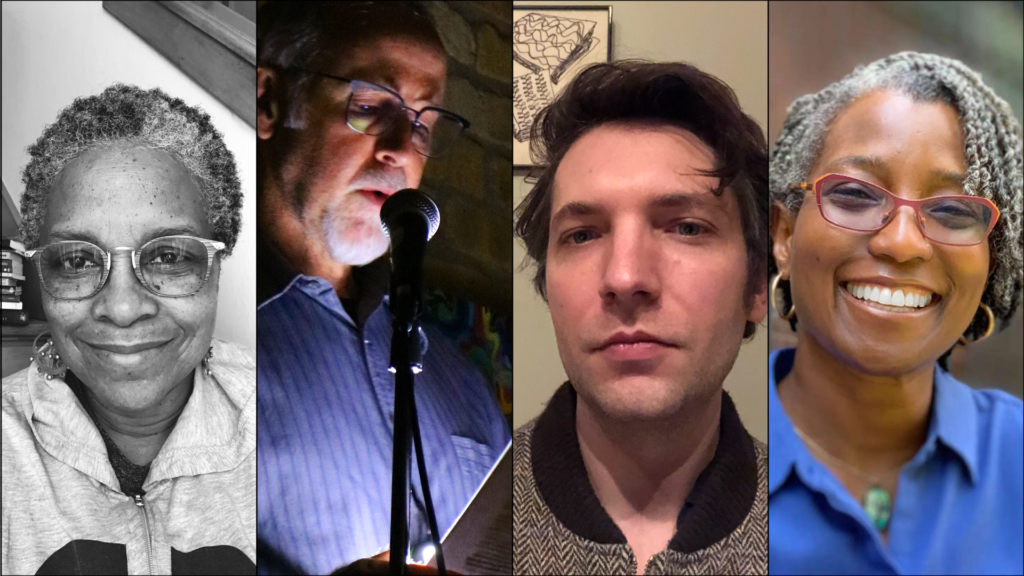 Portia Cobb is a multi-hyphenated artist and poet deeply interested in telling stories that reflect the double consciousness of Black American identity, history, memory, and forced forgetting. Her body of work and research has joined these themes within her poems, short-form documentary video, photographic essays, field recordings, collaborative installation, and community-engaged performance art. She teaches at University of Wisconsin–Milwaukee, in the Department of Film, Video, Animation and New Genres.

Lane Hall is a multimedia artist, writer, and professor in the Department of English at University of Wisconsin–Milwaukee, where he teaches courses on modernist avant-garde movements as well as workshops exploring image and text relationships within book and screen formats. His installations have been exhibited at the Brooklyn Museum, the Milwaukee Art Museum, the California Academy of Sciences, the Shanghai World Expo, the Science Gallery in Dublin, and Eyebeam in NYC. He is co-founder of the Overpass Light Brigade (OLB), a collaborative creative activism project with local roots that has been widely adopted and disseminated. More information about his work can be found on his website www.badscience.org/.

Zack Pieper is a poet, performer, and recording artist, living in Milwaukee. His poems have appeared in editions from Bright Pink Mosquito, Martian Press, Rust Buckle Books, Disappearing Book Series, and Dodo Bird. He has performed at Detroit’s People’s Biennial at MOCAD, collaborated on “Hello Caller”—an experimental/explorative call-in radio show—and recently released “The Last CDR On Earth”, amongst other works centered around live transmission and recorded audio. He has edited for OW and Everyday Genius (Publishing Genius), and is a co-founder of Activities, an archive of songs, albums, and sound experiments spanning several decades of Milwaukee and Midwest-based musicians and multidisciplinary artists. He is the author of CAMEOS (VOL.1), recently published by Extra Copies.

Duriel E. Harris is a poet, performer and sound artist. She is author of three print volumes of poetry, including her most recent, No Dictionary of a Living Tongue (Nightboat, 2017), Drag (2003) and Amnesiac: Poems (2010). Multi-genre works include her one-woman theatrical performance Thingification, and Speleology (2011), a video collaboration with artist Scott Rankin. Cofounder of the avant garde trio, The Black Took Collective, Harris has been a MacDowell and Millay Colony fellow and has received grants from the Illinois Arts Council Agency, the Cave Canem Foundation, and the Rockefeller Brothers Fund. Her work has appeared in numerous venues, including BAX: Best American Experimental Writing, The &Now Awards, Of Poetry & Protest, Ploughshares, Troubling the Line: Trans and Genderqueer Poetry and Poetics, and The Best of Fence. The 2018 Offen Poet, Harris is an associate professor of English in the graduate creative writing program at Illinois State University and the editor of Obsidian: Literature & Arts in the African Diaspora. 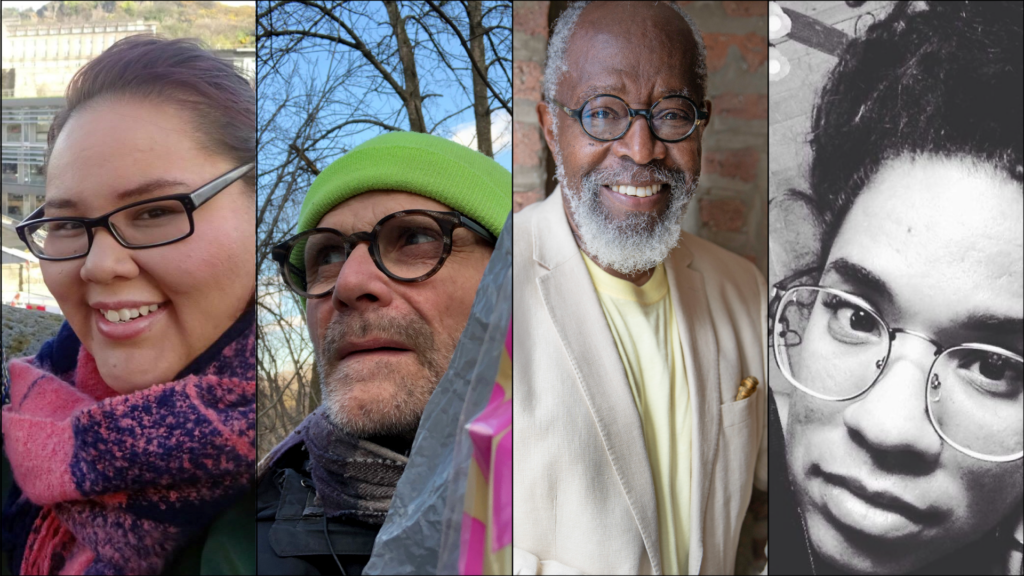 Sass Denny is an Oneida/Ojibwe writer and graduate student in Creative Writing at University of Wisconsin–Milwaukee. She is Poetry Editor for Cream City Review.

Paul Druecke is a writer and artist. His ongoing project America Pastime was recommended by the New York Times (2021). His work with public inscription was included in the 2014 Whitney Biennial and featured in Blackwell and Wiley’s Companion to Public Art (2016). He has published two books, Life and Death on the Bluffs (2014) and The Last Days of John Budgen Jr. (2010). Druecke’s interdisciplinary projects explore the fault lines of social convention.

Ed Roberson is the author of twelve books of poetry, most recently MPH and Other Road Poems (Verge Books, 2021) and Asked What Has Changed (Wesleyan University Press, 2021). A former special programs administrator at Rutgers University’s Cook Campus, Roberson has lived in Chicago since 2004 and is an emeritus professor in Northwestern University’s MFA creative writing program. He has also held posts at the University of Chicago, Columbia College, the University of California, Berkeley, and the Cave Canem retreat for Black writers. His honors include the Jackson Poetry Prize, the Shelley Memorial Award, the Ruth Lilly Poetry Prize, the Lila Wallace–Reader’s Digest Writers’ Award, and the African American Literature and Culture Association’s Stephen Henderson Critics Award. Born and raised in Pittsburgh, Roberson has worked as a limnologist’s assistant (conducting research on inland and coastal fresh water systems in Alaska’s Aleutian Islands and in Bermuda), as a diver for the Pittsburgh Aquazoo, in an advertising graphics agency, and in the Pittsburgh steel mills.

Nikki Wallschlaeger’s work has been featured in The Nation, Brick, American Poetry Review, Witness, Kenyon Review, Poetry, and others. She is the author of the full-length collections Waterbaby (Copper Canyon Press, 2021), Houses (Horseless Press, 2015), and Crawlspace (Bloof Books, 2017), as well as the graphic book I Hate Telling You How I Really Feel (2019), also from Bloof Books. She is also the author of an artist book called Operation USA through the Baltimore-based book arts group Container, a project acquired by Woodland Pattern. 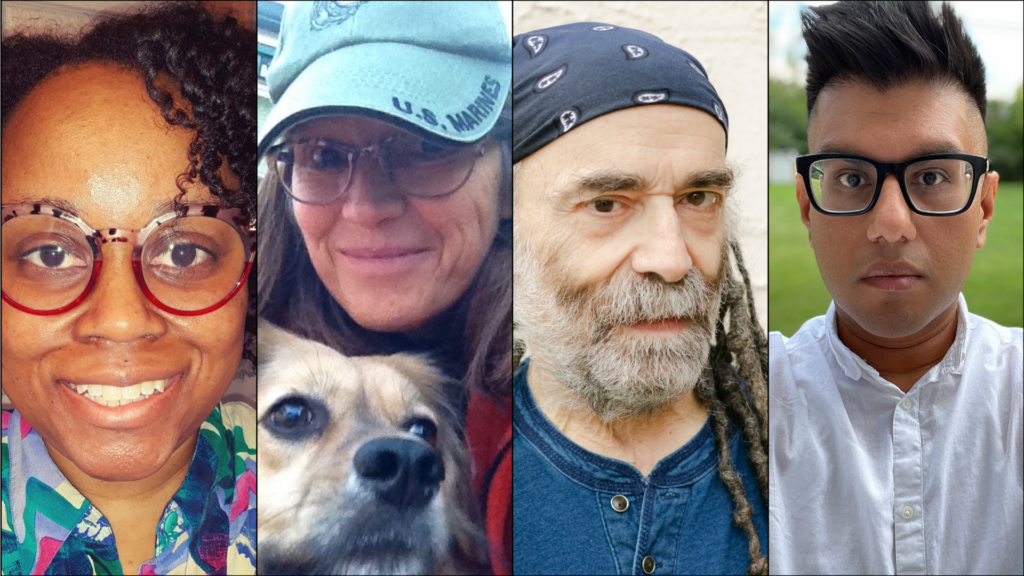 Terimarie Degree grew up with both parents serving in the US Navy. This afforded the opportunity to live everywhere from California to the Aleutian Islands of Alaska. Her work includes reflections on faith, family, relationships, coming of age in the 1980s, the beauty found in the natural world and the role people have to care for it and one another. Terimarie has a number of poems published online as well as within ten print collections.

Janet Jennerjohn is a Wisconsin poet who spends her time between Milwaukee and Door County. She is recently retired from a 35+ year teaching career in higher education and is looking forward to more time to read, write, and walk in the woods with her dog, Django Reinhund.

Poetry and music are the twin foci of Rick Ollman's artistic life. His music is freely improvised on multiple instruments, while his poetry is always pre-composed and recited from memory. These two very different approaches to performance share the goal of heightened expression combining both structure and spontaneity.

Elias Sepulveda was born in Los Angeles, CA to Mexican migrants. He currently lives and works for Milwaukee County as a Juvenile Probation Officer.